Adventures of the Super Sons #1

The inheritors of the DC Universe. 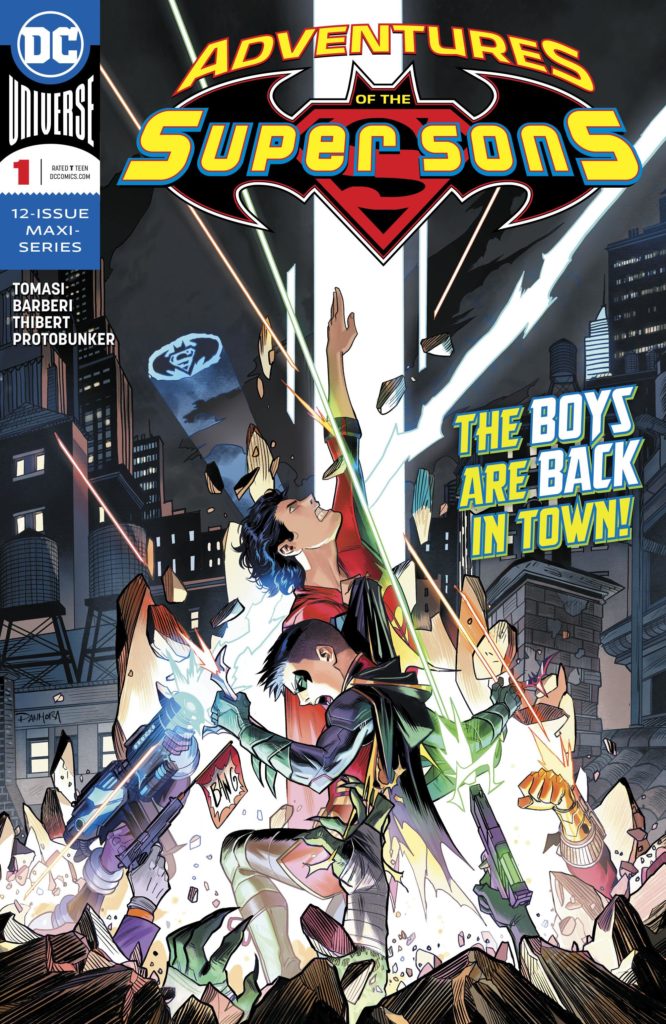 If there ever comes a day that the big two are put to pasture, these two will keep the legend alive. Like many children, these two are often depicted as caricatures of their parents. Damian is incredibly moody, arrogant, and good at everything. Jon is naive, kind, and possess immense power. To be honest they haven’t developed much beyond that point, but when I heard about another run for the Super Sons I figured I’d give it a shot.

Don’t get me wrong, it hasn’t been all bad so far. Watching the two interact throughout the previous run was a treat. The story lines were often either too simple, or overly complicated, but just seeing the two hangout was fun. There is certainly an inherent chemistry to these characters. It’ll take some work, but I believe these two can really come into there own under the mantle of Super Sons.

Overall my complaints about the boys have stemmed from there being little to no character growth or relational development, and also the tiny issue that their main villain so far is just a smaller version of one of their father’s villains. However, I had strong hope that after getting some of the growing pains out of the way it’d be time to let these two flourish.

Coming off a strong Tom King Batman Wedding arc, and diving head first into the era of Bendis with Superman, I imagined DC was going to take the opportunity to do something impressive with the offspring. I was actually looking forward to this run.

The story is predictable, and kinda boring. 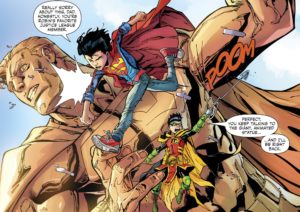 It opens with a banter filled fight scene, then they’re walking out of school for summer break, then they head to their secret hideout to do some summertime crime fighting. Cookie cutter stuff. Full transparency. I fell asleep a couple times reading this comic. Skilled DC Vet, Peter Tomasi, just doesn’t seem interested in bringing any real story telling to the mix. Has he run out of ideas? Is he saving them for something else? What’s going on Tomasi?

Before picking up this comic I had expectations. I wanted the Super Sons to start being taken seriously. I wanted some well thought out story lines. I wanted a little bite. A little grit. I had the simple hope that Damien and Jon’s villains wouldn’t continue to be just mini-versions of their father’s villains.

The story was light and fluffy. The characters are rehashing what at this point, feels like recycled banter. AND THEIR VILLAINS? A miniature roundup of their father’s foes. But how is this possible? Where did these bite sized baddies come from? Well no need to speculate because they just come out and tell us immediately after we are introduced to them.

I don’t know how Damian is going to become the Worlds Greatest Detective 2.0 if every mystery is solved within seconds of him coming in contact with one. The art was bright and spastic, the story was plain and uninteresting, the overall feel of this thing has me feeling like I want to give up on this title. But I probably won’t. I believe in these boys. I want my children to know them as Superman and Batman.

So please Tomasi. Right this ship. I beg of you.