One thing everybody should know about me, is that I am a huge Teenage Mutant Ninja Turtles fan. I attempt to get my hands on every TMNT related book that comes out. So I jumped at the opportunity to review Bebop & Rocksteady Hit the Road. This book is a sequel mini series to Bebop & Rocksteady Destroy Everything from 2016, which I really enjoyed. Once again, the story is tackled by Ben Bates and Dustin Weaver, with Bates providing the artwork.

There is a lot of fun to be had with this book. It starts with our favorite mutated baddies driving a convertible in the desert, while Bebop suggests they go straight like the turtles because “they have all the friends.” Suddenly Rocksteady’s horn becomes a human ear, causing Bebop to scream and wreck the car. After he explains what happened, Rocksteady wonders what to do if it starts to spread and he reverts all the way to human. He decides to cut his ear off and throw it into the desert, before exclaiming “Nothing can stop us, not even an ear!” This is only in the first two pages.

From there the fun continues. Ben Bates and Dustin Weaver do a fantastic job filling this crazy side story with intriguing characters. We get a group of military soldiers and government agent types acting on orders to capture Bebop & Rocksteady alive. We also get Hector Barrales, a YouTube star chronicling his mission to find the monster of Carricitos. A strange dinosaur, a few surprise mutants, and a bit of fourth wall breaking really add to the fun. The only character I’m not crazy about, is special agent Ravenwood. The little we saw of her was clichéd and rather humdrum. She seemed to be your typical Amanda Waller type, but without the moral ambiguity, which is to say the one thing that makes Waller a great character. The rest of the characters are well written with clear motivations and some really great dialogue. It can often be difficult to write dimwitted characters, as it’s all to easy to over do it. It can go from funny to ham-fisted in the blink of an eye. However, Dustin writes in our heroes voices masterfully. Throughout the story our heroes slowly begin to revert to their human selves and I can’t wait to find out why. 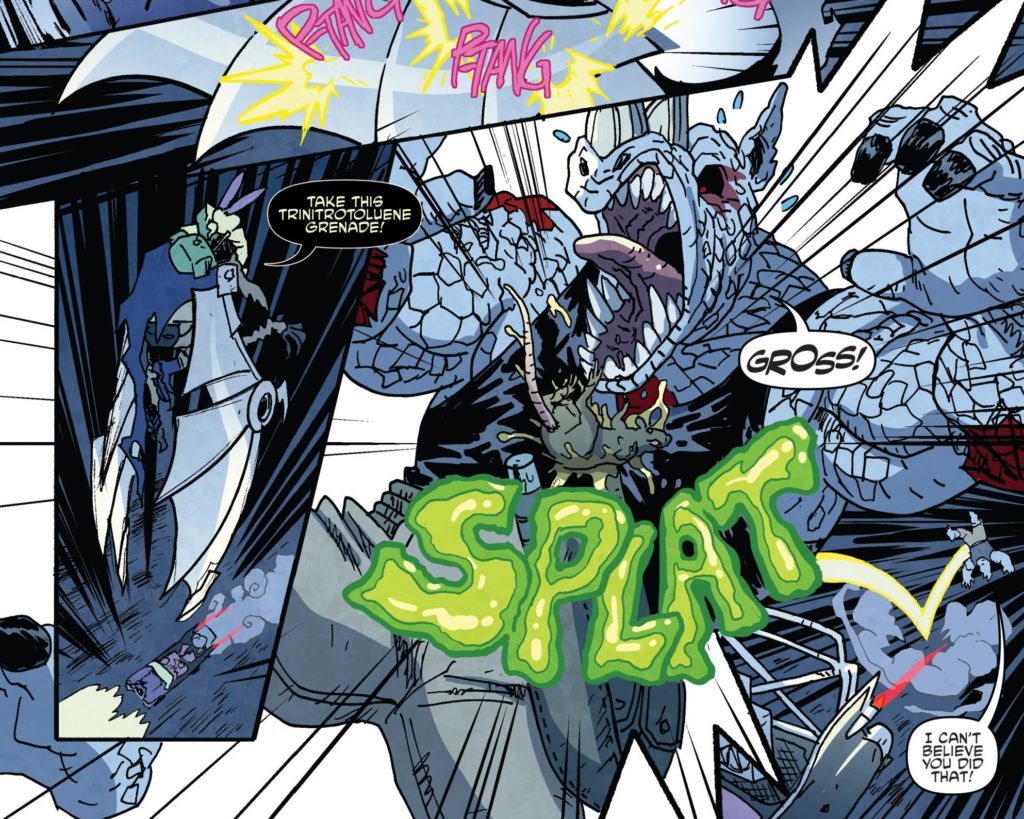 The art and colors are both marvelous. There is a scene that plays out at night in the desert, and it looks like every great night chase from any good horror movie. It’s lit beautifully, with the majority of the panels dark besides where the vehicle’s headlights fall on our characters. The expressions of terror on Hector’s face are perfectly drawn. The only drawback I found, was that I sometimes think Bates tries to cram way too much detail into panels that are just too small. This is just a slight nitpick though.

The Verdict
This book was a lot of fun. There was a lot for TMNT fans, but I also found it to be pretty inclusive. Somebody who was unfamiliar with the franchise wouldn’t have any trouble following along. Not a lot happened in this first issue, but the setup was well executed and I find myself intrigued as to where it’s going. I will be continuing this story for sure.